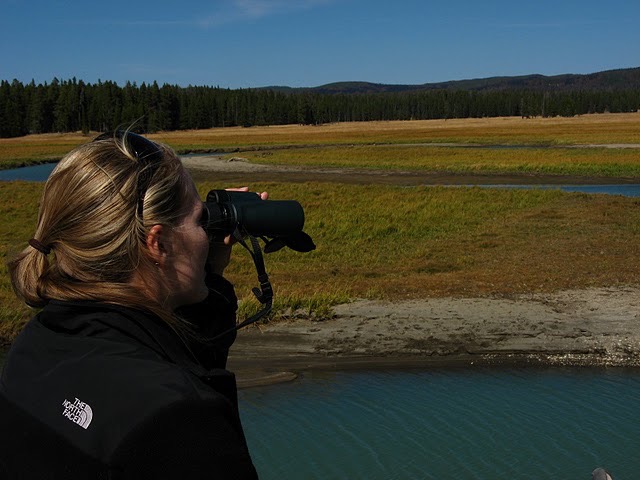 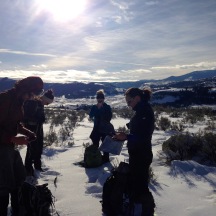 Loading DNA mixed with dye into an agarose gel in the Wayne lab.

My research uses a combination of population genetics, quantitative analyses, and big data (genomic, physiological, and environmental) to understand effects of human- and natural-caused disturbances on ecological and evolutionary processes.

Read more below and see my publications.

My postdoctoral research in the Cheviron lab at the University of Montana focuses on high-altitude adaptation and the evolution of metabolic pathways. I use deer mice as a model species to pursue questions about how animals adapt to high altitude, a question that has long been of interest to biologists. The survival of mice depends on their performance at different altitudes, and genetic patterns indicate natural selection among populations living at different altitudes. Differentiation of the hemoglobin molecule (which animals use to absorb oxygen) in red blood cells between low- and high-altitude populations of deer mice is a well-studied case of genomic and physiological adaptation. The process of how oxygen is subsequently transported through the animal’s tissues is one example of a metabolic network. My research examines the metabolic networks that control multiple physical traits involved in how deer mice adapt to high altitude to describe genetic patterns that are important to adaptation. My work has been funded by an NSF Postdoctoral Research Fellowship in Biology.

For my PhD, I aimed to uncover and characterize genetic mechanisms of adaptive variation. Wild canids are an excellent system in which to study how wide-ranging organisms adapt to their environment since they are found throughout the world and have diverse morphological, physiological, and behavioral adaptations. Additionally, novel genomic resources have been developed for many canid species and the well-annotated dog genome is available.

Using SNP data and individual-level measurements of 12 environmental variables, I identified six ecotypes: West Forest, Boreal Forest, Arctic, High Arctic, British Columbia, and Atlantic Forest. I found consistent signals of selection on genes related to morphology, coat coloration, metabolism, vision and hearing. My findings showed that local adaptation can occur despite gene flow in a highly mobile species and can be detected through a genomic scan with a moderate number of SNPs. These patterns of local adaptation revealed by SNP genotyping likely reflect high fidelity to natal habitats of dispersing wolves, strong ecological divergence among habitats, and moderate levels of linkage in the wolf genome.

A white wolf from the interior of British Columbia. Photo by Marco Musiani.

As a continuation of the above study, I designed a targeted capture of 1040 genes, including all exons and flanking regions, as well as 5000 1 kilobase non-genic neutral regions and re-sequenced these regions in 107 wolves. Using tests that infer selection, I identified potentially functional variants related to local adaptation. By integrating these data with results from my first chapter, I demonstrated that combining data from genome wide SNP genotyping arrays with large-scale re-sequencing and environmental data provide a powerful approach to discern candidate functional variants in natural populations.

The above results were published in two first-author papers in early 2016 in Molecular Ecology.

In many species, natural pigment variation is controlled by the Agouti- Mc1r pathway and many melanistic phenotypes are caused by a mutation in that pathway. Melanism in the gray wolf is caused by a mutation in the K locus. A previous study suggested that the melanistic KB allele (a dominantly-inherited 3bp deletion) was introduced into the genome of North American wolves from the domestic dog via interbreeding, and then underwent positive selection.

I designed a custom capture array to re-sequence five megabases surrounding the K locus core deletion in a larger sample of North American wolves from multiple areas to assess patterns of nucleotide and haplotype diversity, population-specific decay in linkage disequilibrium, and hierarchical patterns of genetic divergence among populations. We found that the North American wolf KB haplotypes are monophyletic, suggesting that a single adaptive introgression from dogs to wolves most likely occurred in the Northwest Territories or Yukon. We also used a new analytical approach to date the origin of the KB allele in Yukon wolves to between 1,598 and 7,248 years ago, suggesting that introgression with early Native American dogs was the source. Using population genetic simulations, we showed that the K locus is undergoing natural selection in four wolf populations, and that Yellowstone wolves are experiencing balancing selection that could be a result of selection for enhanced immunity in response to distemper. These results were published in Molecular Biology and Evolution.

Through a collaboration with Dr. John Novembre and his group at the University of Chicago, we used data from a multi-generation Yellowstone pedigree to calculate wolf-specific mutation and recombination rates. These sequences provided a definitive estimate of mutation rate in wild wolves, a value that is the essential parameter in determining the evolutionary rate of genes and how selection alters the genome. This work was recently published in Molecular Biology and Evolution.

Dogs enjoying birthday cake at the dinner table — a prime example of a domesticated behavior. Photo by Stephanie Steele.

Despite the domestic dog being our best friend, we know relatively little about the who, what, or when of domestication. Through a multi-institutional collaboration headed by Dr. Adam Freedman (Harvard), Dr. John Novembre (University of Chicago), and Dr. Robert Wayne (UCLA), we used whole-genome sequencing to clarify the demographic history of dog domestication and incorporate this demographic history into selection scans to uncover the genes that make dogs so different from their wild wolf ancestor.

We found that dogs and wolves likely diverged 11-16kya, before the advent of agriculture, through a dynamic process of bottlenecks in both lineages, with high levels of admixture. The wolves from which dogs were domesticated were more diverse than present day wolves, and no extant wolf population we sampled was more closely related to dogs. We also scanned the genomes of dogs to find regions that showed evidence of selection, and used our previously constructed demographic model to estimate a false discovery rate. Of the top 100 regions showing positive selection, many included genes involved in behavior, brain function, and lipid metabolism. These genetic changes were likely advantageous for wolves living alongside hunter-gatherer human populations.

These results were published in two papers, led by Adam Freedman, in PLoS Genetics in 2014 and 2016.